1, Help to clear the breast, open the milk as soon as possible, and get the milk early, the baby can eat the colostrum in time, without using the milk powder first.

2, Sucked milk, can clearly know the amount of milk, can also determine the amount of milk per child, you can see your baby drink milk is long; avoid milk too fast to the baby or too little milk to eat too much . (Mothers who are directly breastfeeding are always worried that the amount of milk is not enough. I don’t know how to judge whether the baby is full or not. I don’t know how much the baby’s milk is growing, but suck the milk out with the breast pump to compare the relationship between the baby’s month and the amount of milk. If it is really insufficient, the formula can be replenished in time; some mothers are rich in milk, spray-like, easy to pick up the baby, sucking it out and feeding it with a bottle can also avoid this.)

3, The baby will not be too long each time, sucking is effective sucking, will not develop the habit of biting the nipple to sleep; (direct breastfeeding is easy to cause the baby’s nipple dependence, so that the baby sucks milk for a long time, and really The effective sucking time is not long, and it is easy to develop the habit of sleeping with a teat.)

5, Mother does not have to feed the baby anytime, anywhere, do not have to maintain a constant posture for a long time, resulting in backache and leg pain;

6, Basically can do every time to suck the breasts, can reduce the pain caused by milk rise; (use the breast pump is easier to determine whether the breast is sucked, only sucking the breast will not affect the milk production.)

7, The baby is not easy to grow milk, and will not wet the clothes; (direct breastfeeding is easy to make the baby’s face full of neck is full of eczema, of course, there are other reasons for eczema.)

8, Mother will not crack the nipple, to avoid the pain caused by this; (baby sucking may bite the mother’s nipple, easy to cause inflammation, and lead to forced termination of breastfeeding.)

9, When the baby first comes into contact with the bottle, it will not refuse the bottle. It is convenient for the baby to feed the water. It also creates conditions for the mother to go out during the lactation period or go to work later. (Many babies are used to the mother’s nipple and refuse to eat the bottle’s nipple. Adding complementary food or feeding water is more troublesome; and the mother wants to go out, always worried that the child does not have milk to eat, and if the breast pump is used, the milk can be sucked out before being taken, put in the refrigerator, and eaten with the heat. )

10, It is easier to wean. (Do not rely on the mother’s breasts, you can add other foods to your baby at appropriate time, and gradually wean. Some children refuse to eat other things when weaning, mother will be very painful) 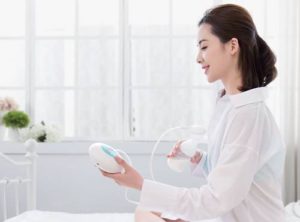 (You should know these things when to start using breast pump)

1, every time you have to suck milk in advance, a little trouble;

2, after each use has to be washed, but also often disinfect the bottle;

3, cold days to heat to the baby to eat, more trouble.

The breast pump can’t suck out, it’s not milk.

The baby’s sucking is the best way to stimulate the nipple and increase the amount of milk. The newborn baby sucks weakly, and the mother should not worry. Slowly push the breast from the root to facilitate the discharge of breast milk. If the breast pump must be used, use it. This way of assistance, otherwise there are only two cases for a long time, or it is gradually no milk, or more and more milk, the breasts are getting more and more, but the milk can not come out, and finally the nipple is broken, Cause mastitis.

It’s okay not to feed your child with night milk.

Too much milk should be sucked up with a breast pump

The correct way is to discharge part of the milk when the breasts are rising. It is best to squeeze it by hand. If you don’t use it, use the breast pump and slowly extend the interval between discharges. The amount of milk discharged, after a period of adjustment, will slowly reach the “balance of supply and demand.”